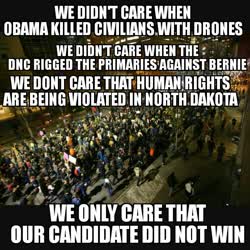 After a crushing defeat, predictions of doom and gloom if Clinton was not elected turned out to not be true.