Now if you lads had studied these aspect of biochemistry and molecular biology and found flaws in the premises or logic I'd listen.

It's all about the the molecules, this is not homeopathy or magnetic bracelets sand the rhetoric in Pant's reply does not replace the falsification of verifiable hard science. I stand behind my words to the point I'd wager large sums of money on them.

You're criticizing something discovered by the guy who enabled biochemistry, molecular biology and quantum chemistry and won two nobels the first for the explanation of the chemical bond and even Wikipedia got this part right. and note Pauling lived 20-30 years longer than any of his detractors that said similar things, the final test: 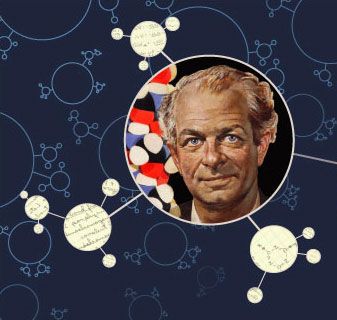 Pauling verified this and quite simply, the nascent vaccine industry wasn't interested as they stood to make a fortune and so they vilified Paulig while he was doing humanitarian work for which he won his second Nobel the only man to ever do so (Madame curie was the first although her discovery killed her, Pauling's lengthened his life; somebody recently won two Nobels as well, Pauling got his in the 1930s.

Note while the polio vaccine does indeed work well it is not 100% free of side effects as Pauling's L-ascorbate protocol was. As he points out, in small doses it is a vitamin but as has been shown even by the NIH recently, in large doses it is therapeutic but it must be in large enough doses and past the limit imposed by the oral route which is 7g/day, the amount our bodies would produce like nearly all other animals do if it were not for a mutation - a broken but of genetics that now makes fat instead of ascorbate.

The guvmint keeps very good stats on vaccine side effects and while it's rare, people do get sick and even die from a shot for reasons not clear to some. You can look those up easily. But this is where this anti-science bit of rhetoric stems from

To be clear, I am not anti-vax; they are A tool but not THE tool as Salk believed - he was a med school dropout that believed there was a needle for every disease whose life goal was to commercialize them all of which resonated greatly with the patent medicine industry at the time. Keep in mind the medical industry itself is the third leading cause of death in the US while the number of deaths from Pauling's protocols and followup advances in molecular medicine is zero for all time and has led for example to the greatest advance in cancer known to date, see Potters work on CYP-17, and the trial they stopped because it wasn't fair to the placebo group that was not getting better. This was sold for $2B and covered by the SF Gate.

As to the rhinovirus and influenza there are countless papers on the in peer reviewed journals that will affirm the truth of this, some based on trials run by the US government.

Some diseases caused by viruses in the Coxsackie family have peculiar biochemical properties that while antibodies are formed in response to a vaccine the patient can still die of the disease quite easily. This is why there is no *working* hiv shot and will never be one, similarly so ebola - see the history of Keshen's disease in China to understand why.

If you were to look you'd see papers showing L-ascorbate has great efficacy against both MRSA and H5N5 that we otherwise have no or very poor luck with and in the former case what luck we have diminishes with the passing of each day.

Some of these papers are published by the NIH who at the behest of the pharma industry block Pauling's journal from Medline, while papers about tropical fish are indexed there - one came out today about the cladistics of Lake Tanganyika cichlids, no doubt required reading for all medical professionals given how many have aquaria in their waiting rooms) while novel hypothesis about Ebola form 1995 that have proved to be true are excluded. This has cost a multiple number of holocausts worth of people to die unnecessarily while raking in literally trillions of dollars for the pharmaceutical industry.

Hoffer pointed out it takes two generations for advances in science to percolate up into the medical profession; germ theory and vitamin C both took 300 years to be accepted for similar reasons and in the past decade fish oil, bad gut flora and niacin have been bumped up a notch to accepted medial canon, that is are now routinely prescribed by doctors. Prior to that they were slagged as quackery. Fish oils were shown to be effective over 100 years ago, niacin 60 years ago. This is always a one way route. Med tech never goes the other way from accepted science to "alternative" medicine. One must question why this takes so long though, no new information is ever discovered.

The greatest scientists of the 20th century were Einstein, Pauling, Feynman and Dyson. Pauling was the only chemist; Einstein states he did ot understand Pauling's work, both Feynman and Dyson in later life turned to biology because of Pauling's discovery, he may have been the greatest scientist of the 20th century but this depends on your choice of metrics.